Guests and Other Things

The Semi-Finalist periodically invites artists, writers, and critics to contribute their work. This is where that happens.
#1: 9/6/2020
Artist and writer Benjamin Terrell recently wrote about the enigmatic work of Kevin Mcnamee-Tweed. He describes his piece as "...a COVID column written without a gallery visit, inspired by a new book and Instagram." 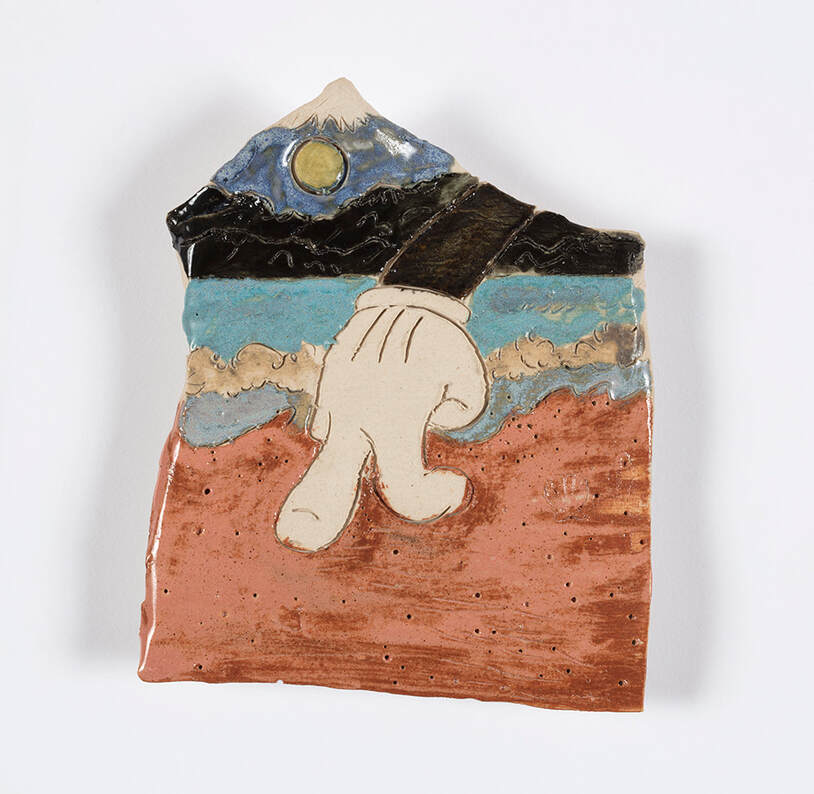 Walk, 2018 Glazed ceramic 6 x 6 inches (15.2 x 15.2 cm)
In art school I worked in the library and it was my job to put things away. I spent whole days cataloging art books big/small, old/new, all different styles and genres from antiquity to avant-garde. There was a room we all wanted to eventually work in where you could see and, in white gloves, could touch and turn the pages (for library patrons) of the actual sketchbooks of world-famous artists like Van Gogh or Cézanne.

We see so much imagery now on iPhones and computer screens without giving thought to how we catalog it or if and where in the brain we "digest" the information into fact or fiction. For me, the art of Kevin Mcnamee-Tweed is the perfect crossroads to stop and think about "thinking", to wash and hang dry memories big or small, or to take a random fact, weigh and fillet it like the fish that could feed or be thrown back from the boat.
​
Turning the pages of KMT
1.  I grew up thinking it was possible to talk to a friend if you each held an empty can attached by string. I remember thinking computers needed to be giant, even room size, like I saw them in the Hall Of Justice on the cartoon, "Super Friends." I also remember being told people died purposely sitting in their own bathtubs with plugged in radios. These days I stop short of believing everything I hear, comfortable in the middle ground between “maybe so" and "perhaps."
2.  As a child (in the seventies), I often went with my father to the newspaper office where he worked. Every desk had a large ashtray and a giant typewriter. The latter looked to me like a sleek sewing machine for ideas. Years later when my father called me to tell me he was dying he borrowed a phrase from early Bugs Bunny to broach the subject. "It's curtains for me Rocky," he said. ​ 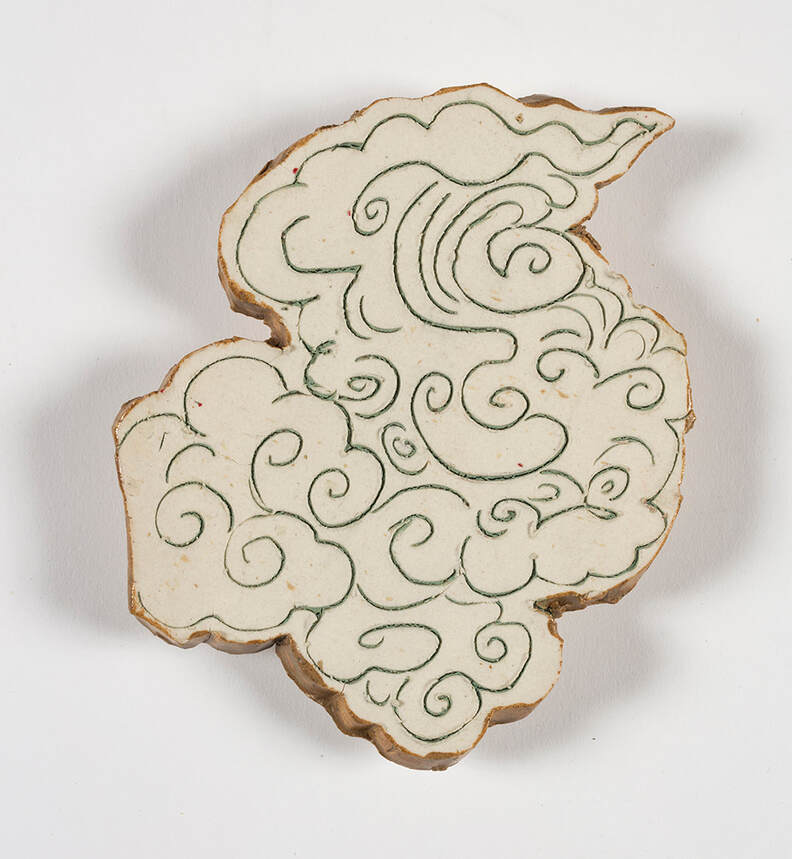 Wave Cloud, 2019 Glazed ceramic 6 x 4 3/4 inches (15.2 x 12.1 cm)
3.  My pockets use to be full of post-it notes, often origins of creative ideas. But sometimes they were stressful reminders, like "pay bill" or information lost of context, details dictated from other people or inspirations unfollowed. Now I write ideas on the "notes" app of an iPhone. Funny thing, I have a drawer of forgotten things like little tools, light bulbs, keys, but also a collection of outdated phones full of notes, photos, and things of irretrievable purpose.
4.  I lost the instructions to most early pc related gadgets but still have a box of miscellaneous parts and pieces. Technology moved so fast and the things I wanted to do had been slow, like put my albums on disc or record my own podcast of old country music I've collected.  There was a gap or gasp between analog and digital, like a cleansing of everything earthy, (plus the boxes were huge and the content small).
​5.  I grew up in the era of record shops and stereo stores and remember when a new section appeared for "personal and portable." Music prior to then had required time, had weight and a tactile nature but then, suddenly it seemed possible to carry yourself around with yourself.  Just think, before then it was possible to walk around all alone. 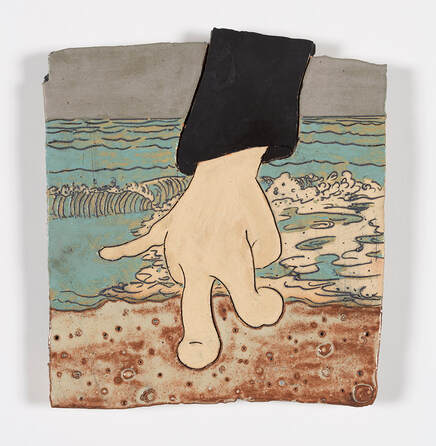 Walk, 2018 Glazed ceramic 10 1/4 x 9 1/4 inches (26 x 23.5 cm)
​6.  The first ceramic painting of Kevin Mcnamee-Tweed I saw was, "Walk", where a cartoon hand strolls oceanside, its two mid fingers as feet, outer two as arms behind the "back" of the hand and the pinkie pointing out. Pointing out as if to say, onward to the land where this is normal or out as if acknowledging another walking hand or perhaps a sign of pseudo culture covering up some other intent.
7.  KMT's subjects on odd shaped slabs of clay (drawn into and painted with glazes) are weighty bygone bubbles of thoughts deep and light. The ideas are often occurrences, like people finding or losing themselves in states of repose, are also independent from the shapes they live on, feeling like significant but forgotten torn out newspaper articles or tops of cereal boxes. ​
8.  KMT makes many references to candlelight. Candlelight, the precursor of the lightbulb, as the universal symbol of sudden epiphany or idea. Often new ideas are a patchwork of old problems on a sharp stick of truth. With wit as a wick, taking in a work by Mcnamee-Tweed can be a slow glow until the artists intent arrives like a sneeze during a punchline.
​9.  Like puzzle pieces to a mosaic of lost limericks, sometimes insightful clues come in the artist's groupings. 'Shrooms, keys, and butterflies painted together are all things capable of unlocking and becoming. Lamps, stars, and potion bottles collected, but scattered around a tabletop offer illumination and/or the opportunity "to level up", like in a video game. 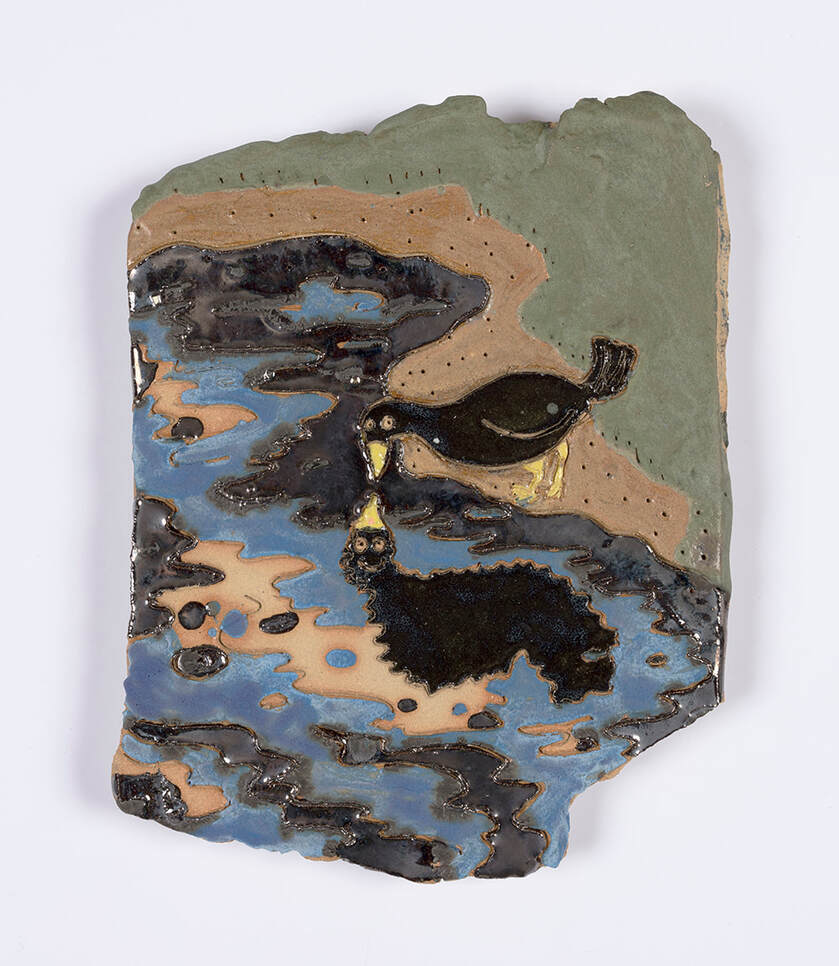 Selfing Unself, 2019 Glazed ceramic 8 3/4 x 6 3/4 inches (22.2 x 17.1 cm)
10.  If there were a historical jump rope, with "dial up" on one end and scrolling, feeds and tweets on the other.. and one began to jump, eventually the sky would rain KMT tiles like loose change out a ripped pocket, down a trouser leg, and those totems would tell us everything subtle and missing in an age of thicker phone screens and thinner magazines.   ​
11.  Civilizations fall and artists are employed to write the history, to remind future us that the joke was always on us and there are a million ways to retell it, write it in stone, folded up and passed in class or drawn and painted in clay like those of KMT. To look away is to forget: a bubble blown is blown to pop, and everything else is water out the boutonniere. ​

Painter, 2019 Glazed ceramic 4 1/2 x 6 1/2 inches (11.4 x 16.5 cm)
​12.  Makers and tool portrayed by KMT: Artist with backward brush paints own beret, artist paints past hole in soul to confront canvas, man chops down tree with a frowny trunk, key, second key, scissors, broken scissors, twisted pencil, hammer hammers too close to the end of the board and nail and it reminds me I was once told....

The artwork of Kevin Mcnamee-Tweed was on display at the Steve Turner Gallery July 25-August 29th (2020) and can be seen on the artist's Instagram page @cottontweed. Steve Turner Gallery has recently released three books on Mcnamee-Tweed that can be purchased through their bookstore, ​www.steveturnerbookshop.com
Ben Terrell's artwork can be found on his Instagram page @moseswaits and in The Semi-Finalist's post "Here and There, Mostly There." Terrell has also written about about Matthew Wong, Kwang Young Chun, and others for a column in the Register-Guard (Eugene, Oregon) called ​Cafe 541.